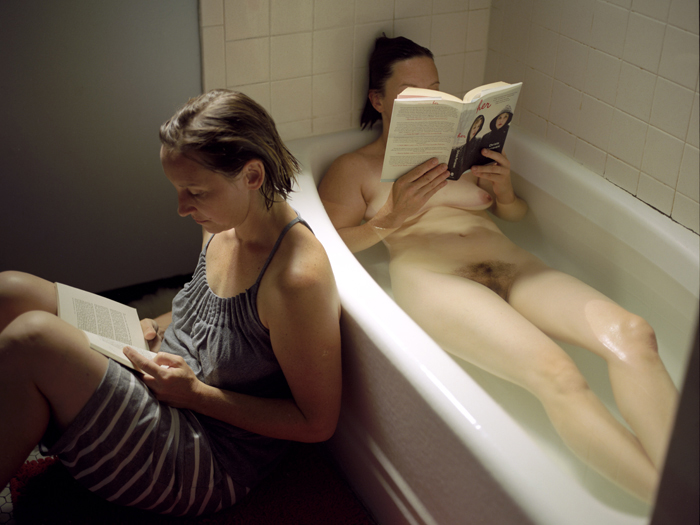 // how long have you been working on ‘double life’. how did it start? // i have always been interested in the multiple sides of ourselves and i had tried working with a model using five to ten multiples of her in a frame, but for me that looked too surreal. it was only when i saw just two of her in the frame i realized the potential of what i could do with that. it looked more believable, like two people in a relationship and i realized that this realness could raise certain questions about our identity or the self, whether our identities are more masculine or feminine and how they can be more fluid than the frame – work set by society. i was interested in how we take on different roles in the relationships that we are in with different people. the model is not actually me, even though they read as self-portraits. the model is a great actor, she’s a real chameleon, that can pull out different sides to herself which can look like two totally different people at times it seems. to make the photographs, i have the camera on a tripod, use a self-timer and interact with the model to make the pictures. then we change clothes and swap places. if there is any physical touching in the final images part of my body is sometimes used, just never my head. technically, it made more sense to use a model as myself, she’s like a stand-in for me.

// each image creates a different emotion. what is your inspiration? // the emotional aspect of my work is what i find most important. for me it’s the psychological aspect of my work that interests me more, not the technical side. i get the most inspiration from my own life which i then reflect though the work; sometimes i just get inspired by watching strangers interact in public or from characters in films. when we watch films, many of us can identify with the female and male characters. a lot of time is spent on deciding what she is going to wear and the emotional tone her clothing is going to set based on colour. there are parts that are quite spontaneous. for example, the image ‘carnival’ was taken when we were on our way from one location to another.

// how autobiographical are the images? // i think it’s kind of a mirror reflecting what i think about relationships and what i think of my own self as it evolves the older i get. the earlier images show something you might do in your late twenties, like drinking in a bar or playing pool depicting a really young stage in a relationship and now that i’m older many of the things i’m interested in have naturally evolved so the characters might be drinking wine, renovating a house or going to bed early. or an embrace might be the kind of hug that is more fragile from just being through a more long-term relationship; the kind of embrace that isn’t even possible with someone you have just been with a couple of weeks.

// you have been working on ‘double life’ for the last fourteen years. has your work had any affect on your relationship with yourself? has it helped you observe yourself? // what’s interesting in it is that it does raise questions back towards me about myself in a relationship. it reveals things about myself to myself. beyond that there are things that i just want to say about relationships or about this ever-evolving side of the self. my own physical presence is never being reflected back to me. over time we’re watching the model change and age and her physical presence change. but the tone of the images is much more like my own personality. the model actually is very different from me; she is really outgoing and the life of the party. so to her, when she sees the images she doesn’t really see herself, she sees the character she’s playing. what is interesting is that we are watching her physical presence change as she moves through her 20s, 30s and 40s. in the end it made me realize how important i felt it was that there are more representations of women as they are aging. there aren’t that many movies or sitcoms or art works depicting women that are past forty.

// how long do you plan on continuing with ‘double life’? // a few years ago i felt i was under a lot of pressure and expectation to move on to another body of work. i was also receiving some questioning from the art world regarding what will happen when she is over forty and whether people will still be interested in the work when she is an older woman. i battled that question for a while and i came to the conclusion that as long as i am passionate about the work and my model is excited about the project that we will continue. naturally, we ourselves will evolve and what i learn about relationships should continue to change over time as i move through my forties, fifties and sixties. i’m excited about continuing with the work as long as there is passion there. it’s one of those things that possesses a natural ebb and flow and can go under the radar if i am working on something else and come back up five or ten years later.

// how has your family reacted to ‘double life’, do they see anything of themselves? // my wife met me after i started ‘double life’, so she knew the work before she even knew me. so for her, it’s just a natural part of our relationship. she has actually been a stand-in a couple of times to the images that i make. she’s always been really supportive.

// are you working on any other projects at the moment? // yes, i am working on a very new project at the moment. during his lifetime, edward weston photographed many models and charis wilson was one of his most famous ones and also his second wife. he received the first guggenheim fellowship for photography in 1940 and for one year he traveled with her, throughout the state of california and made landscape photographs that were published in a book, that she wrote the accompanying text for, entitled ‘california and the west’. what i am doing is re-tracing their steps throughout california to make portraits of my wife in the locations where they made work together. so, it’s my hope that my work raises questions about photographer-sitter relationships, such as his and his wife’s in the 1930s and 40s during modernism, compared to now and looking at relationships and how they’ve evolved since. so it’s kind of interweaving our lives together through looking at the past.

// how does it feel to be working on something different to ‘double life’? // t’s really difficult for me to take a straight portrait and remove the photographer from the image. in ‘double life’, i had removed myself from the power dynamic inherent to photographer and sitter relationships by me coming around the camera, using a self-timer and being able to be part of the scene. so, for me it was a little bit challenging to make straight portraits. for instance now when my subject makes direct eye contact with the camera i am very careful of what the eye contact says back towards the viewer. in double life, the model never makes eye contact with the viewer and we are always voyeurs into her life, but definitely not implicated through the gaze. so lately i have been taking a lot of portraits of my wife and that kind of drew us into this interest of pairing our lives with that of edward weston and charis wilson.

kelli connell / born: 1974 / nationality: american / currently based: chicago / shot over the last fourteen years, ‘double life’ is an ongoing project that gives us a unique insight into the seemingly trivial but often deeply profound moments of an intimate relationship. by cleverly using the same model for both partners kelli forces us to look more honestly into the duality or multiplicity of the self in intimate relationships.